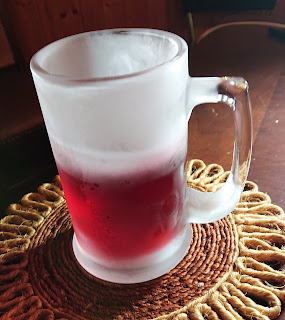 I like my beverages cold. Coke Zero, juice, beer, wine. The colder the better.

Last summer, I asked Jonathan at Côté Place in Argelès if he had ever had anyone request ice for their beer. "No," he replied in a curious drawn-out version of the word. "Well," I said, "consider this a first." Sure, it watered it down some, but the beer was nice and cold on a very hot day.

Our Italian-American friends who lived in Argelès for a year or so, now Nice, had us over for karaoke and served the beer in a large frosted mug. It reminded me of the A&W Root Beer frosted mugs at the drive-in when I was growing up. My reaction to the mug was so positive, next time they took the 20-hour ferry ride between Barcelona and Naples they brought me back two of the mugs as one of the simplest and best gifts I've ever received. (D-L carries one mug with two hands so as not to drop it.)

Oftentimes, ice forms from whichever beverage I'm drinking. And the coldness generally lasts the entire meal, unlike an ordinary glass in which the liquid quickly moderates toward room temperature.

I'd been looking for similar mugs for our place in Geneva, but most of what you find in Switzerland are decorative steins. I wanted just a plain, super-thick, glass mug.

My stepdaughter and wife to the rescue. They found mugs online, had them shipped to Boston, then re-shipped to Switzerland.

I am a happy puppy. With a chilled throat.